The Bhutan appeal in 6 words 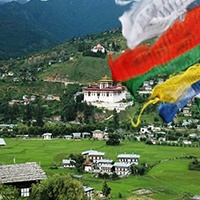 This tiny kingdom, nestled in the Himalayas has only been open for tourism since 1974 and as a result, has largely remained both raw and rugged. Preserved by its efforts to resist foreign governmental influences, Bhutan has been left with a truly individual culture, beauty and history.

Bhutan is a Buddhist country and due to its isolation from western culture (it was the last country in the world to allow TV) its customs, landscape and everyday rituals have been able to grow and thrive organically, making it quite a magical place to visit.

It is a real privilege to be able to explore the Bhutanese way of life, on foot, through the mountains and villages - so here are a few highlights that will paint a picture of an adventure that you might just want to step in to.

With a restriction on tourism until recently,  you would be forgiven for thinking that the people of Bhutan may not be welcoming of visitors - but you would be mistaken. The Bhutanese are heart warmingly friendly and welcoming to travellers. With its deeply ingrained Buddhist roots, Bhutan is an incredibly happy place, where prosperity is measured by the collective happiness of its people - yes, the measure is GNH - gross national happiness. A unique and refreshing perspective for a country to have in a world largely governed by the shortness of time and money. So if you're looking to up your average number of smiles per day.. this is the place to do it.

A feast for your eyes, you'll look upon a country lit up with brightly coloured prayer flags, gilded temples and monks dressed all in red. Markets showcasing skills through crafts present a plethora of vivid colour whilst the monasteries are decorated with exquisite attention to detail - where even hidden doorways are not overlooked for decoration and intricate pattern.
Look up and you'll be rewarded by mountain vistas - a mix of purple and grey as dappled light creates deep shadows and brilliant highlights. Look down and the bright green of a cherished landscape preserved by time and careful hands is one that deserves more than just a passing glance - another reason why your feet should be your only method of transport here.

By law 60% of the land must be covered by forest at all times, a result of it being the first country in the world to establish a constitutional obligation for its people to contribute to the sustained protection of its environment. This has made it a real haven for biodiversity and a joy for anyone with a passion for plant life. It also protects an array of wildlife and is home to animals such as the tiger, snow leopard and Asian elephant, not to mention the incredibly brightly coloured monal pheasant, indigenous to Bhutan.

From the Druk Path with its forests of blue pine and dwarf rhododendrons to the iconic architecture of the perfectly poised Tigers Nest Monastery, which sits 4200 m high and the bursts of colour within the Paro Valley - one of the most historic valleys in Bhutan, trekking through this country will provide an experience so different, memorable and one that few others will share.

The constantly changing colours of the rolling landscape around you will keep you on your toes making its a simultaneously exciting but serene environment to walk through.

Bhutan is a proud country - of its heritage, it's people and it's rare ability to resist western influences. Now keeping its tourism limited to small groups travelling mostly on foot, it is quietly and slowly revealing its inner charm and secrets to the outside world.

Also known as The Land of the Thunder Dragon, Bhutan earns its powerful alter ego as the result of a violent storm. With unruly weather raging during the building of the Ralung Monastery, the noise of the storm cloud was described as that of the roar of a dragon and was so named 'Drug-Ralung' meaning 'Thunder Dragon.' From then on the disciples of the the monastery were known as the 'Drugpa' or 'Those of Thunder.'

There are many more mysteries, legends and stories to be unveiled but we'll leave those for you to unearth.

Open, friendly and welcoming the Bhutanese people are fiercely protective of their history and culture that has been so excellently maintained, so make sure you take a moment to visit the Ta Dzong - a striking watch tower and museum, for a display of the history of Bhutan, giving you a background to the land you are about to explore.

A tiny country, measuring only 110 miles from North to South and 200 miles from East to West, some have described it as a living Eden, home to several eco-systems and few roads - completely alien to those of us who have grown up surrounded by urban development and where most of our connections are digital. There is little more we can say to ignite your fascination into this intriguing country, bar the fact we're packing our bags to trek through it's mountains and valleys, should you wish to join us!

With a belief that there is more to the long term satisfaction and health of its people than material wealth, as indicated by its annual measure of their happiness and the fact the country is still new to tourism, Bhutan has a lot it can teach us! However, it is still learning how to cater for the desire of its foreign visitors, so you need to prepare your expectations.  Our Bhutan Trek is a real off the beaten track adventure, which will suit those patient to understand another culture, looking for an authentic travel experience, with tough mountain walking and rugged camping en-route.