Moff on a Mountain: Kilimanjaro Edition 2

Back for more? Continue reading about holly's kilimanjaro experience. we take a peek into her mountain diary to get the lowdown on trekking africa's highest mountain.

'I woke up feeling sick, assuming it was the first flavour of altitude hitting I remembered that taking on fluids and continuing to eat were key. As your time on the mountain progresses and you get higher up, everything you do seems much more of a laborious task. Packing up your sleeping bag, getting into your clothes for the day and coming out to eat breakfast is so much more of an effort. I went to check out the breakfast and it didn't disappoint, although in my current state I grabbed a sausage and went outside. Soon enough, I was chucking up still with my sausage in hand. I looked up and saw I wasn't alone, one of my team was rubbing my back and another was also being sick not too far along the way. What a sight. The ridiculousness of the situation made me laugh, and once I had eaten a chocolate croissant and brushed my teeth I was fine again. Everyone's experience with altitude is so vastly different, some of our group didn't feel ill hardly at all, whereas other's oxygen levels were so low they were taken down. I was sick once every day, but once I'd endured that and eaten to fill my stomach with fuel once more, I was good to go. Regardless of your state, if you can continue to try and eat and hydrate - it can make the world of difference.

Remembering from when I did the Great Wall of China earlier in the year, I followed the mantra 'be bold, start cold' that means don't put on all your layers before you set off walking as inevitably you'll be working up a sweat soon enough. We set off in single file due to the small, winding trail that of course continued up and up. The porters make a good pace as their aim is to get to camp and set up before you arrive, people shout 'LEFT' to make sure you move out of the way in time as they are carrying up to 20 kg on their head at any one time. It really puts things into perspective when you're thinking about your cosy work conditions back at home. I found my thoughts often turned to how lucky I really was back home to have all the big and small luxuries in my lifestyle that we just take for granted.

As we looked back on where we had walked so far that day, we could see the most beautiful stretch of rainforest and Mount Meru stood tall amongst blue skies piercing through the clouds. It was spectacular and reminded us to keep looking up and around you. Vic said if you added the height of Ben Nevis on top of Mount Meru, it would almost equate to Kilimanjaro. Even with that analogy, it's hard to picture just how high you have to climb and it can feel like an endless slog. But taking each day, and each hour, as it comes makes for a more manageable task.

The itinerary of the day included walking through cloud, scrambling up boulders, admiring waterfalls (including an I'm-a-celeb-shower-style moment), and getting to know the group and the porters even better. With the varied landscape and the porter's cheery chants and songs, our spirits were kept high. And each turn had in store a new surprise. We had been warned about the micro-climates of the mountain but today brought sunshine and some refreshing chills that made for great conditions. Every now and then we came into contact with some hurried trekkers, often eager to overtake us and get ahead. Vic warned us that this is detrimental when at increasing altitude and we'd soon catch up. One particularly confident trekker from another group decided to push past us and scale a boulder ahead looking like a drunk spider-man in action. Catching up with him moments later was a satisfaction similar to opening my favourite snack of the day. Ah, simple pleasures.

A common ritual was emerging when getting into camp: having your picture with the sign that displays the camp you're in and the altitude you're at, trudging to your tent to set out your sleeping bag and things while it was still light, and heading to the mess tent for a chat and fuel refill. It meant you could crawl into bed as soon as dinner had been consumed and every chance you got at getting rest was welcomed.

I had noticed the lack of wildlife as we got higher up the mountain so I liked spotting what I had described at the time as 'a magpie-on-steroids meets eagle'. I don't claim to be Attenborough. Just a massive fan. Sorry, Dave.

This evening was a little different, as the porters gathered around before dinner to sing and dance. You might have seen videos of this point which people often say gives them shivers, it's even more magical being in the moment. Just when you didn't think you had any more energy to muster, you find yourself throwing your limbs around to the beat of their chants and being in awe of their lively dancing. The 70-or-so-strong team of porters formally introduce themselves and you get to find out a bit more about their lives. All with the backdrop of the sunset and the mighty Kili peak behind you. It's definitely a standout moment.

Vic says tomorrow will test us, with the factor of altitude being ramped up even more. The briefing every evening gives us lots to think about, but its reassuring knowing what the next step is and being in the hands of such knowledgeable and experienced figures. It was time to attempt sleep before another big day on the mountain. Sleep was not a luxury I was about to get.

Today was probably my least favourite day. Everyone had different highs and lows, but you had to remember that the highs were as intense as the lows and this experience was short-lived. For each individual in the group a different element of the experience challenged them. Whether it was the camping for six days without showering or the lack of sleep, some suffered from altitude sickness; whereas others found the endurance aspect of trekking on tired legs, day after day, the most difficult. But whatever it was that really pushed us to our limits, made the satisfaction of conquering them even sweeter. However, this day, I did not feel sweet or satisfied. This was the day I sat on a rock and shed a few tears into my dusty buff. Altitude and exhaustion had got to me and the prospect of another night of no sleep was making me feel a little broken. An 'ey up', some words of comfort and a well-needed hug from Vic later, I had fire (and a helping of chocolate) in my belly. Onwards, I went. Altitude takes its toll and its often-said emotions spill out so much more easily on the mountain - I learned to embrace it.

The increasing altitude caught a few of us, despite going 'pole pole' (slowly, slowly) and sipping on our water, our sick decorated the rocks that outlined our trail. Keeping close tabs on us all, Doc explained this was totally normal and just another challenging element of facing Kilimanjaro. It didn't mean it was the end of the road for us, it just makes each step a little more gruelling. And after around eight hours of trekking, it made the feeling of slipping into our sleeping bags even more inviting. I enjoyed chatting with Jacqueline, the only female porter out of the 70-strong team with us, who was impressively strong helping me across some of the more exposed sections. We trekked past giant groundsels (a cactus-like plant that can only be found on Kilimanjaro), clambered up and squeezed past boulders and stepped over streams. It was a full body workout in a mountain-sized play-park. A bewildering adventure that nothing could have prepared me for, yet despite how rotten I felt- I also felt unbelievably happy to be there. How lucky was I to be somewhere this incredible? Knowing we were half-way through our trek today gave us a bit of a kick. And as the effects of altitude were brewing amongst us, the team grew even closer, sharing jokes and encouragement.

We woke just before 5 am to get a good head start for the day. Taking the usual concoction of meds to combat the symptoms of altitude, I began layering my clothes. Mornings were bitterly cold as you shimmied out of your sleeping bag and you had to get yourself pumped to face the day ahead. I was pumped.

Today was the day that some of the group were a little nervous about due to the much-anticipated Barranco Wall. It's also widely known as the 'kissing wall' due to having to press your face against the rock to squeeze across the thin, exposed path between boulders. This section of the trek consisted of several hours of making your way up sizeable boulders of the Barranco Valley to reach the elevated level above. It was an all-encompassing full body workout and the altitude factor meant we were all feeling considerably out of breath, however, this was one of my favourite parts of the entire trek. Once we'd got to the top, everyone was on a massive buzz and the views were something else. We lounged in the sunshine for a pit stop, having pictures against the beautiful backdrop and laughing about ticking off another of the Kili sagas.

We could see stretching rainforest, distant peaks and rock formations, and a clear, pastel sky. Moments change so suddenly here. From the taunts of the Barranco Wall to wild weeing in the sunshine with a beautiful view. And then back to facing a gruelling ascent that seemed to stretch for miles, and enduring micro climates that made you layer and delayer and zap your energy.

Today's lunch stop was at a camp where we were told that the 'Return to Kili Comic Relief' celebrity team stop and camp overnight, it gave an interesting perspective to compare our experience to their own. After a little sick stop on my part, I made sure to grab some food as we were warned the next section may test us. Lucky. As we had four hours of consistent uphill, as well as undulating valleys that hid some tough climbs. It seems obvious to say we were going 'uphill' when we were trekking a mountain, but it's surprising how up and down you go each day due to the contours of the terrain and in order to aid your acclimatisation. Mesmerising yet taunting views of the peak ahead loomed behind the clouds, and as we got into camp ahead of summit night, the atmosphere was electric. I managed to get into my sleeping bag at just after 6 pm, time to rest and catch whatever sleep I could before being called at 10.30 pm. It was happening. The time had come. Resting my over-active mind now was an impossible task, regardless of how tired my body already was. Sweet dreams (not so much)!' 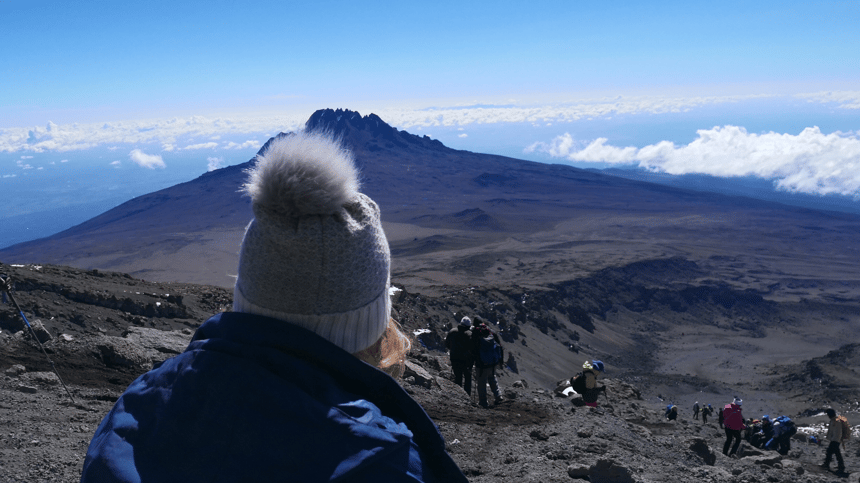